Don't Cry For Me, Casanova 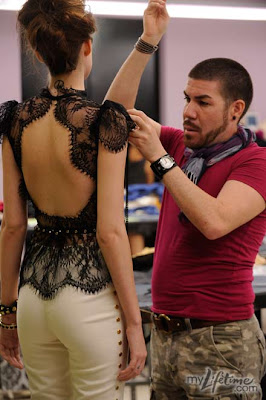 Nearly lost in all of the Gretchen and Tim Gunn drama from Episode 5 was Casanova's "major, major, MAY-JOR diva moment", as Valerie put it. Sleep deprived and stung by a mild Tim Gunn criticism, Casanova laid down on the lounge sofa and had himself a good cry.

"I'm on the verge to loose my mind!" he wailed, as a parade of team mates tries to console him. "I'm even getting FAT!" Valerie, Michael D and Peach all tried to hold his hand yet it looked as if he was getting close to walking off the show. Credit must be given to his model Sarae Cart, who looks half his age yet became the wise elder and gave Casanova the inspiration to carry on. (And did you notice that it was Michael C. from the other team that encouraged Sarae to talk to him?)

It was a classic Project Runway "Make It Work" moment for Casanova. He busted out a fabulous pair of white pants to go with his lace top to take home the win and immunity for the next challenge. So good was Episode 5 that this scene took a backseat to the drama to come. But let's offer some late congratulations to Casanova. He turned adversity into something beautiful and it is those moments that make us love this show so much.