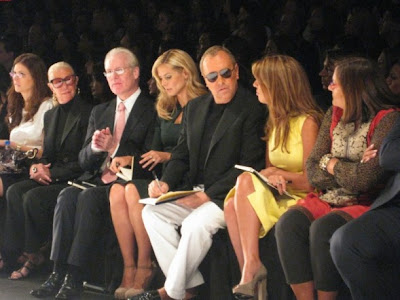 Photo courtesy of Lisa Gilpin.
LK: We left the AmEx SkyBox and headed downstairs to The Promenade for the show. Right away we spotted Kelli Martin and Jennifer Diederich. They were adorable. After watching them on the show and interviewing them for the podcast I felt like I already knew them and just plunged right in to a conversation. Jennifer is tall! Kelli was with a friend who sounded exactly like her.

Scar: I'm always struck by how the designers look ten times better in person than they do on TV. I mean, they are attractive on the show but exhausted and attractive. When you see them in person they are better rested and not as stressed. Anyway, Kelli and Jennifer were adorable and both greeted us warmly.
Tbone: I skipped that ridiculous air-kiss mob scene and made quick for my seat so I could evaluate the contents of the Bravo gift bag. What fabulous flotsam would they provide that we could give away in one of our contests, I wondered?

LK: Laura Bennett was signing an autograph for a young fan. I also spotted a mom with three adorable daughters all in braces. I asked them who they were rooting for and it took them a while to answer. Finally one said Kenley and the others agreed! So cute.

Scar: Blayne Walsh was who I saw next. He could easily pass for a male model. I think we suggested he try out for, 'Make me a Supermodel.' He looks very California, very surfer.
Tbone: Blayne was much taller in person than I imagined him to be. He had on a very cool outfit that he designed himself. I could easily see him being successful doing menswear.

LK: Blayne is certainly as tan as you would think - and has a strong jaw and a very handsome face. He was friendly and CUTE.
Click here to continue.
Posted by LauraK at 1:04 PM