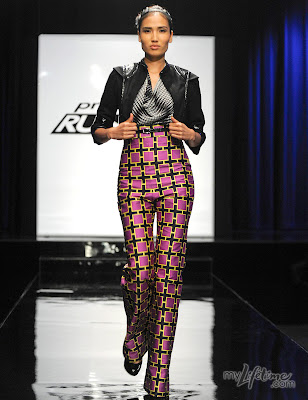 Sometimes the creative process takes us to places we never could imagine. Sometimes it reveals truths about the world in ways that cannot be spoken. And sometimes it can provide an avenue to reveal hidden truths about ourselves. For Mondo Guerra, creativity has been a sustaining life force.
In Episode 10 "There's a Pattern Here", the seven remaining designers were presented with a repeat of S7's popular HP challenge, designing a pattern to be printed on fabric that would be incorporated into their design. As inspiration, the designers had childhood photographs and visits from their family members to evoke a profound moment from their lives.
Mondo designed a cool black plus sign outlined in gold with magenta blocks in between. He used this pattern on a high waisted pant that was countered nicely with a black jacket and top. He scored his third consecutive solo win with this look ( a Project Runway first!) and solidified his growing dominance on the runway.
But for Mondo, this was much more than just another beautiful garment. It was a way to tell with his family and the world about his HIV status. "I feel better now", he said after sharing the secret he held for so long, "I feel free". It was a moment that reached beyond the silly competition and touched our hearts. What a privilege it has been to get to know this amazing designer.
Congratulations Mondo, that's two for you now in the BPR Top 5 Looks of Season 8!
Tomorrow is finale day! Tune back in as we reveal your choice for the Top Look of Season 8!
Posted by Tbone at 6:00 AM