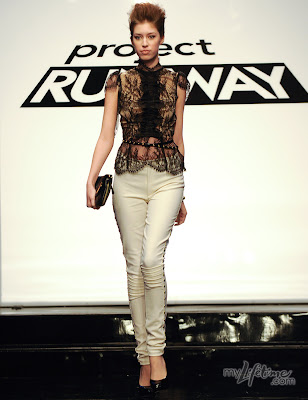 Team challenges have always been a recipe for major drama on Project Runway and perhaps no episode in the show's history exemplified that more than Episode 5, "There is an I in Team". In a unique twist on the tried and true concept, the remaining 12 designers were split into two teams of six and tasked with creating a 6-piece collection for Fall 2010.
Casanova found himself on Team "Military and Lace". It had been a rough road for the lovable designer up to this point. On the bottom twice in the first four challenges, he had reached a point where he felt he couldn't do anything right. And when Tim Gunn visited him in the workroom and told him that his lace top looked "like the mother of all these other women", he reached his breaking point. "I'm on the verge to loose my mind", he wailed. There was no consoling him and it looked as if he might simply walk away from the competition.
But in a classic "Make It Work" moment, Casanova rebounded and busted out a banging pair of white pants to go with his black lace top for a complete look that the judges swooned over. It was a moment of redemption for Casanova and a vindication of his talent after being repeatedly bruised and battered by Tim and the judges.
Most people will remember this episode for Gretchen's epic runway meltdown or maybe even Tim's post-game designer takedown. But the true shining moment was Casanova rising from the ashes to turn adversity into something beautiful. These are the moments that make Project Runway something a little more special in the world of reality television and reminds us why we loved this show in the first place.
So congratulations to Casanova for making the BPR Top 5 Looks of Season 8. Fantastico, Casanova!
Posted by Tbone at 6:00 AM