There are only eight more weeks until the August 20th return of Project Runway! That wasn't in the mailbox - I just felt like squealing with delight.

Leanne Marshall gave the Bluefly blog Flypaper a note about her upcoming collection for that online retailer. You can the Bluefly Facebook page to know when that collection debuts or you can check right here. A little fly on the wall tells us that it will be sooner than later. 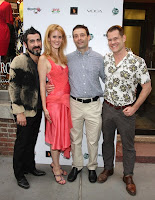 Guest of a Guest tells us that Season 1 designer Austin Scarlett joined Fern Mallis and Alex McCord and Simon van Kempen at the Divas Shop for Opera event on June 24th. Speakeasy learns that Austin donated a scarf for the cause.

Season 4 winner Christian Siriano fierced up the Gen Art 15 Anniversary benefit on June 24th. And who else was there? None other than the previous mentioned Silex!

All photos courtesy of WireImage.
Posted by The Scarlett at 5:25 PM