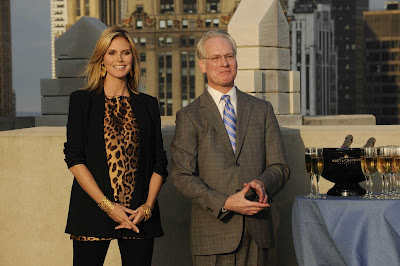 Get ready to pop those corks, Tim! Hot off the presses:
NEW YORK (May 3, 2011) – As part of an aggressive expansion to grow its original programming stable, Lifetime today unveiled its 2011-12 programming slate featuring a powerful line-up of two all-new scripted dramas, doubling Lifetime’s number of scripted series from two to four; pick-ups of 11 unscripted programs representing more than triple the amount of reality hours on the network, including Project Runway All Stars and Project Accessory...
Season 9 is slated to premiere "this summer" and if past scheduling practice is followed that likely means a late July debut. Casting is going on now and primary filming will most likely take place in June and early July.
The big news today is the confirmation of previous reports on the return of Project Runway All Stars and the debut of Project Runway Accessory:
Eight one-hour episodes each of Project Runway All Stars, featuring talented and memorable past contestants from the series who will once again compete against each other in a series of challenges to show they still have the innovation, talent and poise that made them household names, and Project Accessory, following enterprising artists who will be put to the test to create the newest and hottest trends in accessories as they compete for a cash grand prize to help them launch their own fashion accessories business.
Thankfully, there was no announcement concerning the dubious Project Runway: Masters project. We are excited to see former Project Runway Executive Producer Rich Bye affiliated with Project Accessory but are worried about the dilution of the brand. Is this too much Runway?
Click here for more from Lifetime.
Posted by LauraK at 11:40 AM