More From Tim Gunn in Nashville 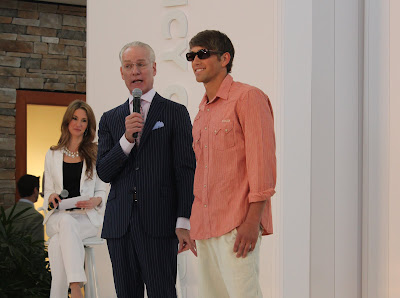 Photo: Out & About Nashville
This is the first time I have read an article where Tim is representing "Fifth & Pacific" brands rather than Liz Claiborne Inc. (The Liz brand has been sold to JCPenney and the new identity of the company representing the remaining brands is "Fifth and Pacific.")

Here is a highlight:

“I have a chin test,” he explained when it came to choosing the right color. “Put the clothing up to your chin, and if the color makes your skin glow, it’s a good color for you. If the color washes you out, you should avoid it!”

He was still apt to point out some fashion faux pas, even on the models as they walked, even asking one of the male models to tuck in his shirt because men’s shirts are meant to be tucked in. “It would just look better,” Gunn said.

“It’s important that Fashion Week takes place in cities across the country, not just in New York City,” he said after the show. “Nashville has developed its own version of Fashion Week supporting local talent, and I’m thrilled to be part of it.”


Click here for the full article from Out & About.
Posted by LauraK at 6:58 AM