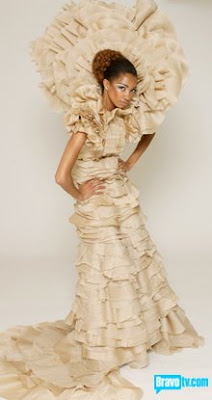 It's been called the single best design created yet on Project Runway. Alberta Ferretti called it an "amazing couture dress", Michael Kors said it was "very soignee" and Nina Garcia, who is not prone to public swooning, could barely contain herself when she saw Marcia walk it down the runway. She said that she "could see it photographed for any major fashion magazine!"

Was there really ever any doubt about the Top 5 winner this season?

On paper, the pairing of Christian Siriano and Chris March seems a bit counterintuitive. How would the young, brash visionary work with the seasoned showman? But if ever there was a perfect storm of challenge, personalities and talent, this was it.

In "En Guarde", Christian provided the vision and concept while Chris provided the practical experience to make it work. They called themselves "Team Fierce". The result of their collaboration was nothing short of audacious. 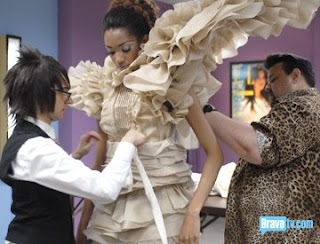 Using a mere 45 yards of cream colored organza, Team Fierce used the inspiration of Marcia's romantic, old world hairstyle to create a magnificent dress of layered, circular wonder. Topping it off was a four-foot wing (or "cell phone tower" as Chris joked) projecting fan-like from the shoulder. There was so much material, even the official Bravo photo couldn't fit it all in one frame!

The dress earned Christian a deserved win and further solidified his growing status as a fashion prodigy. He of course went on to Bryant Park as a finalist where his collection further expanded on this theme. Tonight we find out if he will walk away with the big prize.

Congratulations Christian and Chris! There is no big cash award or fancy car with our title, just our love and admiration. You designed the BPR Top Look of Season 4!