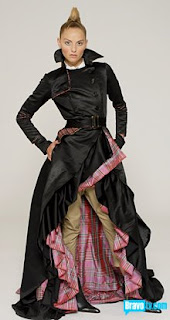 Every season of Project Runway brings with it a certain number of elements guranteed to raise our ire. Less talented designers last long past their time, a fan favorite gets eliminated just before making it to fashion week, someone breaks a rule or two, the list goes on. Perhaps the biggest boil on our collective butts has been the team challenge concept. We love to complain about them!

But in Season 4, the producers somehow managed to get it just right for one glorious episode that produced some of the most inspired work we've seen on any season.

In "En Garde", the final 8 designers were paired off in teams of two to produce an avant-garde look using the models hairstyle as their inspiration. Victorya Hong and Jillian Lewis went against popular convention as they both wanted to be team leader. Neither headstrong designer would give in and Victorya got the nod by a flip of the coin. 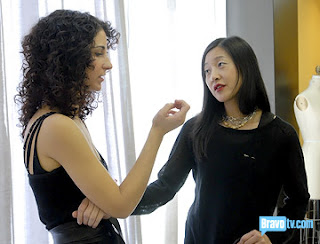 Although Victorya earned praise from the judges on the runway for her ruffled top and jodhpurs, it was Jillian's stunning trench that was the show-stopper. Using a midnight colored fabric with red tartan lining, the coat spoke perfectly to the rebellious theme sported by model Jacqueline's faux-hawk hair. It was a breathtaking showing that demonstrated two heads were sometimes better than one.

Victorya's successful run would soon come to an end as she fizzled out in the denim challenge. But Jillian continued to deliver week after week, showing off her formidable style with a consistency that earned her a spot in the finals. Congratulations Victorya and Jillian - you landed in the #2 spot on the BPR Top 5!