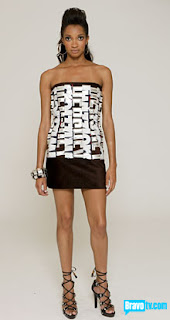 BPR begins its own countown to the finale today as we reveal The Top 5 Looks of Season 4, voted by you! As it turned out, there was no 5th place finisher. Instead there was a dead heat in the 4 spot. First up, Chris March from "Eye Candy".

Few designers have had the ride Chris experienced in Season 4. Eliminated early on in the "Trendsetter" episode, he was given a second shot when Jack Mackenroth became unexpectedly ill during the next challenge. He was nearly eliminated again and desperately needed a confidence boost.

In"Eye Candy", the 10 remaining designers were given 5 minutes to ransack the Times Square Herhey's store in Season 4's alternative material challenge. It proved to be right up Chris's alley as he was able to use his backround in costume design to full advantage. 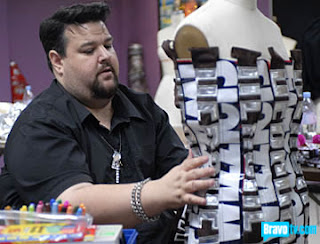 Chris knew straight away not to go for the candy as he snagged as many fabric-laden objects that he could find. Using Hershey's pillows as the primary source, he created a chic strapless mini-dress with the Hershey's logo running vertically from bust to hip. He called it "Stephen Sprouse meets Andy Warhol" and his model Marcia looked confident and sexy walking this down the runway. This design didn't win the challenge, but it earned Chris March a spot on the BPR Top 5. Congratulations Chris!