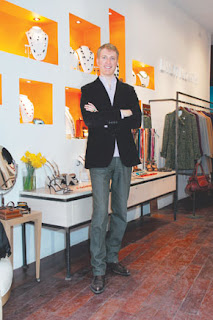 Emmett McCarthy wants to prove that he is more than a reality TV has-been.

Although his appearance as a contestant on Bravo's second season of "Project Runway" helped his growing business, the graduate of Parsons The New School for Design doesn't view himself as a former TV star and isn't even a fan of the program.

"Reality TV isn't for me," McCarthy said. "In fact, if I had watched the first season of the show, I am sure I would have never even tried out."

After all, McCarthy was already a fashion veteran, having worked as a men's wear designer for brands such as Nautica and Wrangler, and more recently at Kellwood, where he designed for the company's men's shirts division.

McCarthy said the only reason he auditioned for "Project Runway" was because of his respect for Tim Gunn, the show's taskmaster and former chairman of the Department of Fashion Design at Parsons The New School for Design, whom he had gotten to know well. McCarthy said Gunn continues to be a supporter. In many ways, he said, Gunn, now chief creative officer at Liz Claiborne Inc., has helped him to believe that he can make it as a designer.

"Tim came to my high school and was the one who got me interested in Parsons, so his guidance has meant a great deal to me," McCarthy said.

McCarthy owns and operates a 750-square-foot boutique, EMc2, at 240 Elizabeth Street in lower Manhattan, where he sells his own women's wear designs as well as jewelry (designed by vice president of design Erin McDonnell) and accessories from other vendors. He also retails a select number of pieces from fellow "Project Runway" contestants Kara Janx and Chloe Dao.

Celebrating the first anniversary of his shop's opening on March 21, McCarthy said he has extensive growth plans for the next year. He will launch his online store, emmettmccarthy.com, next week, where he will sell everything that is available at the brick-and-mortar location. He intends to expand the shop on Elizabeth Street beginning in August and open a second store on nearby Bleecker Street this year. In September, McCarthy is to launch a line of handbags under the Elements by Emmett McCarthy label, selling exclusively on the QVC shopping network. Also for fall, he plans to start a high-end shoe line under the Emmett McCarthy Collection label, which he will wholesale to high-end specialty stores. He initially wants to present the shoes to Neiman Marcus as an exclusive. They are made in Italy by Monique Soeterboerg.

After the footwear, McCarthy said he will launch the women's apparel line for spring 2008 wholesaling.

His existing line, which is available exclusively in the shop, retails from about $175 for a blouse to $4,500 for a shearling coat. The coats have been performing well, despite the generally mild winter, he said. There are also brocade jackets and lace tops and an array of spring dresses that just hit the selling floor, such as a white eyelet shift dress and silk chiffon wrap dress.
Posted by LauraK at 10:47 AM