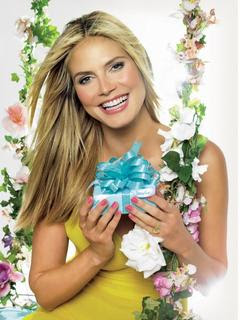 What's that present you're about to open there Heidi? Could it be an announcement about Season 4 of Project Runway? Alas, it's just a fabulous shot of her in a pitch for Douglas cosmetics.
We really thought we would have something solid for you by now regarding S4 auditions but apparently the lid was kept shut over the weekend. Commenter 'pradadevil' mysteriously reports that NYC auditions will be held April 7, 8 and 9. No confirmation wahtsoever on those dates yet. Meanwhile, here are some items of interest to tide you over:
Andrae Gonzalo celebrates the termination of his Season 2 contract (nearly 2 years!) with a link to his favorite parody...
Here's a photo of Jeffrey Sebelia, circa 1997...
Tim Gunn overheard at lunch talking about the Oscar red carpet: "I couldn't believe when I heard so many people say there were so many surprises," says Gunn summing up the fashion snooze fest. "The only surprise was there were no surprises."
Let's see if a new day brings us some new news. As always, stay tuned!
Posted by Tbone at 7:45 PM